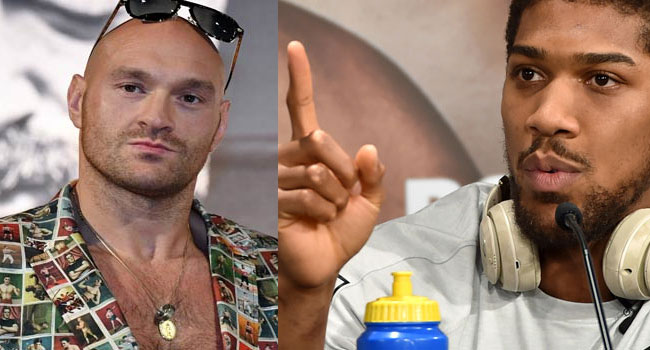 British heavyweight world champions Anthony Joshua and Tyson Fury have agreed in principle to meet in two blockbuster fights, according to both camps on Wednesday.

Joshua’s promoter Eddie Hearn has been negotiating with Fury’s management for several weeks and he said the terms were in place for the fighters to go head to head.

No contracts have been signed yet, but Hearn expects WBA, IBF and WBO belt holder Joshua to face WBC champion Fury to determine the undisputed king of the heavyweight scene in 2021.

“We’re making great progress. There is still a lot to overcome. We are looking at venues and dates,” Hearn told Sky Sports.

“We’re in a good place,” he added. “It’s fair to say that, in principle, both guys have agreed to that fight. Two fights.

“(There’s) a lot to overcome in the meantime. We’re moving in the right direction. I’m confident that both guys have given their blessings for the fight to go ahead.”

Hearn said the first bout could happen in the summer of 2021.

Joshua is due to fight Bulgaria’s Kubrat Pulev next, while Fury, 31, has a rematch due with American Deontay Wilder.

“I’ve got to smash Deontay Wilder’s face right in in my next fight and then we go into the Joshua fight next year.”

Joshua, 30, is still on course to face Pulev despite injuring his knee during a recent training run.

He was seen with a knee brace and crutches during a Black Lives Matter protest at the weekend.

But even if both Fury and Joshua win their next bouts there may yet be a further delay before they meet in the ring as the WBC have said Dillian Whyte must fight for their version of the heavyweight title before the end of February 2021.

Hearn though said both the Joshua and Fury camps had “approved the structure” of the proposed deal.

“We have the Dillian Whyte mandatory which is due before this fight,” Hearn added.

“(But) both guys are in agreement. The structure of the deal has been put forward, and agreed to by both parties. There is a model in place that both parties are happy with.

“It’s the biggest fight ever in British boxing. It doesn’t get bigger, and there will never be a bigger fight in our generation.”

Meanwhile Frank Warren, one of Fury’s promoters, endorsed Hearn’s optimism by saying: “Things are going in the right direction and we couldn’t be more happy that a potential mega fight is in reach.”